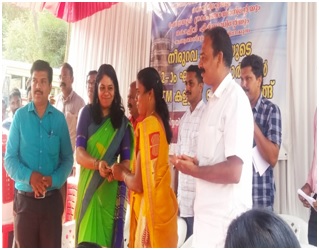 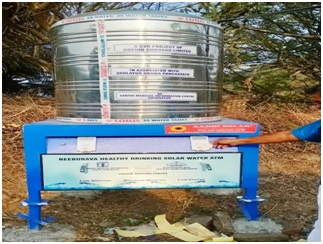 745 sq km tribal belt of Attappady in Palakkad District faces acute drinking water crisis throughout the year. Even though the two major rivers i.e. Bhavani and Siruvani providing sufficient water which is not suitable for drinking as it is highly polluted causing to have many water borne diseases especially among children. Water becomes muddy during rainy season due to increased inflow of sediments from mountains and during summer river dries up leaving behind muddy water again. The same water is used for bathing, washing clothes and cleaning the cattle contaminating the water further and aggravating the water borne diseases in the region.

At this juncture CSL intervened and explored new avenues for helping the tribal people. CSL associated with Santhi Medical Information Centre, a leading NGO in fields of education, health and hygiene interventions for poor and marginalized people to undertake innovative solar water ATM project. Under the project, a Reverse Osmosis (RO) plant was set up at Sambarkode area of Sholayur Panchayath. The plant takes water from Shiruvani River and it purifies 5000 litres of water in an hour. This purified water is supplied through tanks to the solar water ATMs located at different localities of the Panchayath. Each one can avail 20 litres of purified drinking water per day by using the water ATM card. The water costs 25 paisa per litre for tribal communities and 50 paise for others on this rechargeable ATM card. The utilization of water ATMs is accessible by a mobile app, which will create alarm once the water level goes down to 100 litres. These units will be filled immediately on a specially assembled vehicle. 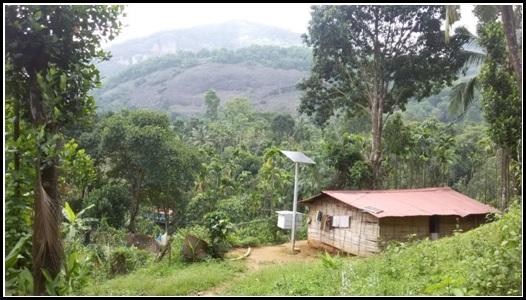 Lighting 75 Tribal Houses with Solar Power at Kunjippara tribal village at Kuttampuzha Panchayath in Ernakulam District And then there was LIGHT!!!

Over the years power cuts in Kerala state has reduced in number as well as in duration. In the previous few years, the Govt. noticing the plight of the students also ensured ‘zero’ power cuts during the state and central examination periods. Where in one hand, most of the homes of the state have inverters/ generators and are leading a much relaxed life, there are a few on the other side who are burning the mid-nights oil both literally and other wise! So, who are these people…? To meet them one would have to travel deep into the forest areas of Ernakulam District nearing Idukki. After reaching Blavanakadath one needs to take a ride on a simple wooden barge which is pushed through the water by a man using a tall Bamboo pole, the only way to reach the forest area. The next mode of transportation includes a bumpy ride 10 km (approx.) through the trench. For distraction of thoughts which would be constantly focusing on the discomfort of this particular ride up the hill, the driver of the vehicle will hospitably narrate the stories of how elephants have attacked and killed humans in the area with much detail of the recent incidents of the past. In a while, one starts to notice the cemented houses of the Kunjippara tribal village of Kuttampuzha Panchayath.

Kunjippara tribal village of Kuttampuzha Panchayath has not been provided any lighting facility from the Govt. or other agencies due to its topography and issues related to proximity. The local tribal (Muthuwan) families of this tribal village have been living in darkness for as long as they can remember. The only light which brought some relief to their sights apart from the day light was the light from the Kerosene oil lamps and bonfire which they lit during the night time. Continuous purchasing of wax candles was something which was beyond what they could afford and buying oil to light the lamps was also becoming exclusive as the vendors were now charging whatever price to seize the opportunity. Life was already difficult for this group of people and gradually hardships were just increasing. Their children, who came to visit them from hostels, preferred going back soon, as without proper lighting provision they were finding it difficult to complete their vacation home work. Women were suffering from poor vision and partial blindness due to constantly doing kitchen work in the dark. A ‘good night’s sleep’ was considered to be a privilege as on most of the day the men in the families were busy guarding the village from the attacks of the wild elephants, yet many a times the wild beats took no pity.

But, as the proverb goes, ‘When the going gets tough, the tough gets going!’ Samridhy, an NGO which was already working for the upliftment of the tribal groups in the area, taking notice of the problems faced by them, approached Cochin Shipyard Limited requesting support for providing Solar Lighting Systems in the region. Being convinced of this poignant situation, Cochin Shipyard Limited was delighted to extend all the required assistance for this project as part of one of the many CSR initiatives which were being undertaken by the organization. 75 tribal families selected by the ‘Oorukoottam’, tribal family fraternity were provided with independent mini Solar Power Plant consisting of state of the art materials and equipments at a cost of Rs 1,00,000/- per family unit.

Lighted homes not only shoved away darkness from their homes, but also brought hopes for a brighter future for them and their children. The miracle of light took no time in bring about tremendous impactful changes in the life style and standard of living of the tribal’s in multifarious ways. They saved money, now there was not much need to buy Kerosene oil for lighting the lamps. There has been a marginal yet steady increase in the household income as now there women folks were able to continue with their work of making mats and other items from sedge grass. News – national and international was now available to them on a click of few buttons with TV and DTH connection. Children seemed to be closer to them now, as they could talk to them over mobile phones. For students who came to visit their parents, life at home was no different than the conditions at their hostels, except the fact that here, their mothers were right besides them to love and care for them. There was a sense of peace and the jungle has now become a safe place to live in as the wild animals were scared off by the light ‘a new and unfamiliar phenomenon’ from a distance. The only thing which now woke them from a deep sleep was the smile on their faces after a pleasant dream. The families which have not been provided this Solar Lighting provision are being helped by the others in terms of money to purchase Kerosene. The families which have this provision have also generously accepted visitors like, new mothers and their babies, old or sick people, etc to stay in their homes for the night time.