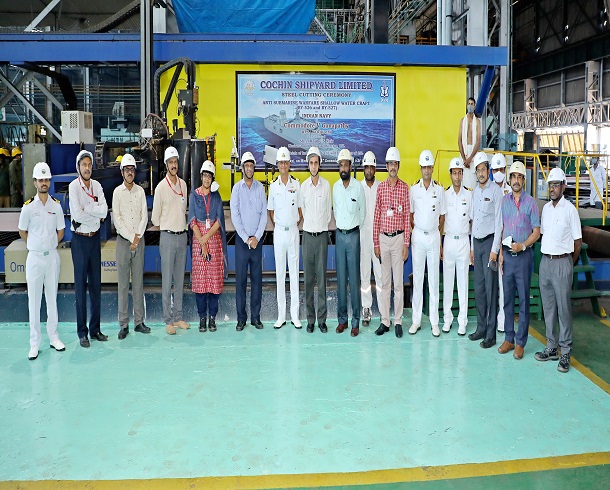 The ‘Steel – Cutting’ ceremony of Two (02) Nos. Anti-Submarine Warfare Shallow Water Crafts (ASWSWCs), being built by Cochin Shipyard Ltd. (CSL), for Indian Navy, was carried out today at CSL, Kochi, by Commodore V Ganapthy, Warship Production Superintendent, Warship Overseeing Team (Kochi), Indian Navy. The Steel cutting ceremony is one of the initial milestones in the vessel construction process. This is the Fourth (04) and Fifth(05) vessel in the series of the total 8 vessels.

These technologically advanced vessels are designed and engineered indigenously and will be equipped with various payloads to cater to the vessels’ functions.  The vessel will feature stringent signature and stealth technologies to avoid detection by submarines and other surveillance systems.  Significant part of the payloads and solutions will be from Indian firms and these vessels once commissioned will showcase the country’s Atmanirbhar capabilities.

Cochin Shipyard Limited (CSL), signed the contract for construction and supply of eight (08) ASWSWCs for Indian Navy, which was won through competitive bidding process, on 30 Apr 2019.  The order value for these eight (08) vessels is ?6,300 Crores. The project is to be completed in 90 months.

These ASWSWC’s are capable of full scale sub surface surveillance of coastal waters and co-ordinated ASW operations with aircraft. In addition, there vessels will have the capability to interdict/destroy sub surface targets in coastal waters. They can also be deployed for day and night search and rescue in coastal areas. In their secondary role, they will be capable to sew intruding aircraft, and lay mines in the sea bed. The vessels will be equipped with highly advanced state-of-the-art Integrated Platform Management Systems, Propulsion Machinery, Auxiliary Machinery, Power Generation and Distribution Machinery and Damage Control Machinery. The ASWSWCs will be built to International Classification Society rules.

CSL is currently on expansion mode investing a total of ?2,800 Crore in infrastructure augmentation by way of a new 310 Mtr long dry dock at Kochi and a ship lift based Ship Repair yard at Willingdon Island, Kochi.