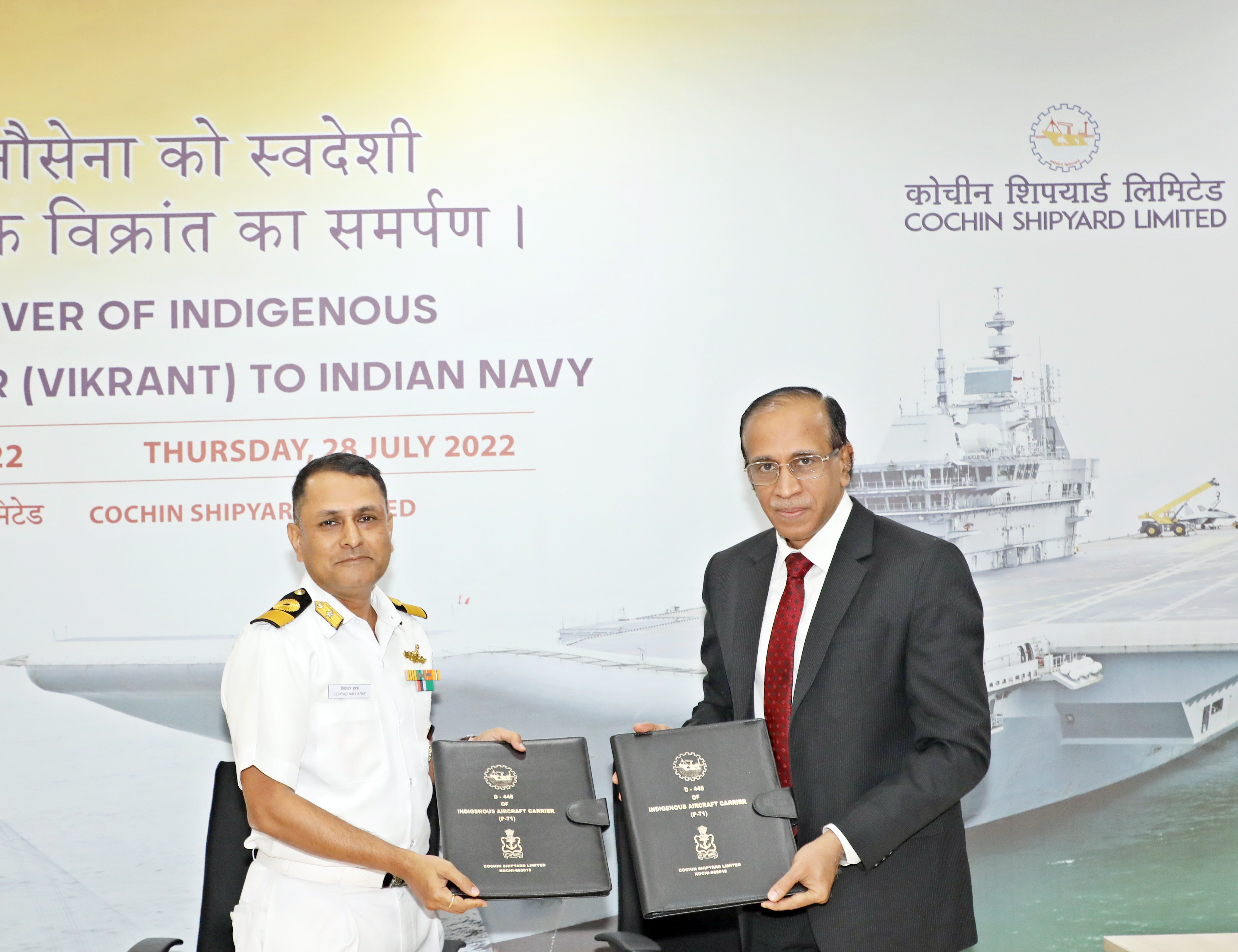 Cochin Shipyard Ltd (CSL) the largest public sector shipyard and the only shipyard under the Ministry of Ports, Shipping and Waterways today delivered the first indigenously built Aircraft Carrier (IAC-1) to the Indian Navy. The handing over function of the ship was held today at CSL premises at Cochin. The acceptance form was signed between Shri Madhu S. Nair, Chairman and Managing Director, CSL and the Commanding Officer (Designate) of the vessel Commodore Vidhyadhar Harke, VSM. Cmde Vivek Thapar,VSM Cmde(ND)-IAC, DND, Cmde Sameer Agarwal, CSO(Tech) Kochi & Chairman D448, Cmde Ishan Tandon, Director-CATT, Cmde V. Ganapathy, WPS(Koc), Shri Bejoy Bhasker, Director(Technical), CSL, Shri VJ Jose, Director (Finance), Shri Sreejith KN, Director (Operations), CSL, Shri Suresh Babu NV, Advisor to CMD, CSL and other senior officers of both CSL and the Indian Navy were present during the function. The vessel is scheduled to be commissioned and inducted into the services of the Indian Navy and the country in Aug 2022.

The IAC is the largest warship ever to be built in India having a deep displacement of appx 45,000 tonnes and is also considered as the most ambitious warship project of the country. It is unprecedented in terms of size and complexity in comparison to any ship (both commercial and defence) built in India till date. The vessel is a mammoth steel structure of 21,500 tonnes of special grade steel developed indigenously and used in Indian Naval Ships for the first time. The enormity of the vessel can be gauged from the appx 2300 kms of cabling, 120 kms of piping and over 2300 compartments available onboard. The vessel is powered by four gas turbines in a COGAG (Combined Gas and Gas) propulsion configuration. The IAC is equipped with numerous high end technologies including network centric distributed data processing & control systems, intricate Aviation Facility Complex, the state of the art weapons and sensors and also has one of the most powerful propulsion and power generation & distribution (PGD) systems to be installed onboard any ship.

The basic design of the IAC has been developed indigenously by the Directorate of Naval Design of the Indian Navy and the entire detailed engineering, construction and system integration was undertaken by Cochin Shipyard Limited. The shipyard carried out the detailed engineering of the ship using advanced software which enabled the designer to get a complete 3D view of the compartments of the ship. It is the first time in the country that a ship of the size of an Aircraft Carrier is completely modeled in 3D and production drawings extracted from the 3D model.

The ship was launched on the 12 Aug 2013 and with this India joined the elite club of nations in the world capable of indigenously designing and constructing an Aircraft Carrier. In spite of various teething problems due to its complexity, the launching of the ship of this size in about 3 years’ time from keel laying was considered as a creditable achievement even by International Standards. Considering its complexity and developmental nature, the project was executed under three different phases of contract. The last phase contract was signed in Oct 2019. The maiden sea trials of the vessel was conducted in Aug 2021 and subsequently the vessel proceeded and successfully completed another four phases of sea trials. During these sea sorties extensive trials and testing of the vessel and all its equipment/systems, including endurance testing of propulsion machinery, electrical & electronic suites, deck machinery, life-saving appliances, ship’s navigation and communication systems, manoeuvring trials sea acceptance trials of various aviation handling systems etc., were undertaken.

The construction of the IAC had created a vast network of national vendors and subcontractors and ancillary industries including MSMEs covering the complete product life cycle management including logistics and spares. Construction of the IAC has thus contributed immensely to the Indian economy as it generated a demand in both the upstream industries such as steel, electro mechanical machinery equipment and also for downstream sectors such as infrastructure and services. Approximately 550 indigenous vendors had supported the construction of the IAC amongst which close to 100 of them are MSME’s. The indigenous content of the vessel is of the order of 76 %. The support provided by the Indian Navy and the shipyard to these vendors resulted in the indigenization of various equipment and systems.

Building the IAC has also acted as a catalyst for high end capability development in the country. The Naval design team has acquired significant insight into the basic and functional design aspects of an aircraft carrier. One of the major contributions of building IAC is the immense skill development of the highest order that has materialized over various trades and disciplines, which if sustained, will auger well for the country. The skill sets accrued through this project are of the highest level on account of the complexity of the project. Apart from individual skilling, the project has led to enhancement of Detailed Designing and Engineering capabilities of CSL, which in turn helped overcome many production challenges. Thus the IAC project emerges as a true reflection of the Make in India and Atma Nirbhar Bharat initiatives of the Government of India.